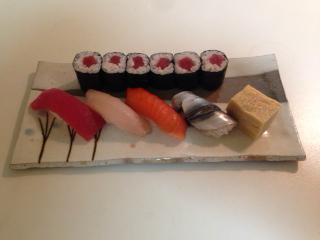 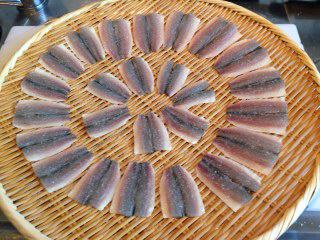 I recently made sushi for an occasion.
When making sushi, especially away from Japan where sushi is originated, the hardest thing is to organize ingredients.
You can buy sashimi quality Tuna, Snapper and maybe Prawns but not so many varieties around.
So basically, if you are not happy with Avocado or Teriyaki Chicken rolls, you have to gather other ingredients yourself.

There is an estuary just around corner from where I live and it's apopular spot for catching big Jewfish at night time using live baits.
People get to the wharf and first catch small fish and keep them live in a bucket to go after big ones.

No one eats those little ones nor believes that they have values but in fact, they are very important classic sushi ingredients in Japan.

In Japan, the fish has 4 different names in the market according to the size and the price for Shinko, smallest up to 5cm goes up as high as $180/kg which is more expensive than prime Blue fin tuna.

Prepping bowl full of Shinko is obviously the fiddliest thing you could imagine and we used to spend hours when the season come.

The taste though is rewarding and also, the fish is often used to judge the quality of the restaurant as chefs have to understand the fish fully to make it right ( not too salty, too vinegary nor fishy ).

Anyway, I went to the river and caught some little "baitfish" or so called Herrings. 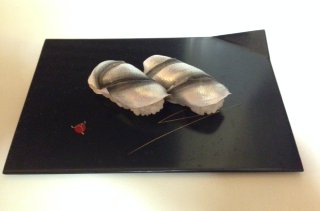 I heard chuckles from the other people when they saw me keeping the bait fish but I didn't care.
If you live faraway from your hometown where food culture is different, you have to make your own.

It required a long time to prep the fish starting from scale, butterfly, salt, wash, rest overnight, dip into vinegar, rest overnight, then finally sushii and although they are gone in 10 seconds, I had a great time sharing classic sushi with friends here under Southern Cross.

Get the latest updates on new products and upcoming sales